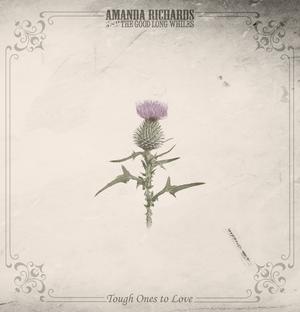 Last week we featured a single called 'Fresh Kill', a single that I enjoyed immensely.

Even though I am someone who considers themselves a fan of most, if not all, of the sub-genres of the broad country genre, I must admit that I do favor the rootsy side over the super-polished and overly produced side. Therefore, Amanda Richards' 'Fresh Kill' was exactly the sort of track that holds a special place in my heart, so I had a good feeling heading into my first listen of her new album.

And man...Tough Ones To Love did not disappoint.

The album is a lovely throwback to traditional country, with songs telling real, interesting and diverse stories. And this is great and, with this album, it is just perfect as Amanda is clearly a natural storyteller, as demonstrated from the get-go with 'Fresh Kill', a song that warns of the dangers of letting life pass you by.

'Last Train' has a wonderful wild west vibe to it as Richards sings about rejecting the advances of a charming yellow-eyed devil. I mentioned in my single review last week about how rich 'Fresh Kill' was in imagery, and in language, and this recurs throughout the entire album, and 'Last Train' is another fine example, as is 'Another Temptation'.

Like her storytelling, Amanda's smoky vocals also shine - particularly on 'Close To Me', a track that shows a more vulnerable side to the singer, increasingly so towards the end of the song where her voice grows and shakes with emotion.

'Lame Tattoos' reminds us that looks can and will fade, whilst 'Cinderella Waltz' is a heartbreaking tale of waiting for a prince that never shows.

This is a diverse album with ten original tracks and three covers, all telling different tales but, ultimately, they're all connected together with an authenticity that makes this album really great. I don't know all too much about Amanda Richards personally but I can tell that this is an album that stays very much true to who she is and I can sense that she's proud of this collection of songs...and she has every right to be.

This is a fantastic album and might just be a sneaky late addition to our top albums of the year list.

Tough Ones To Love is available now.

For further information on Amanda Richards, visit amandarichards.net.
at 02:35:00

Established in 2015, Somethin' Country champions only the best Americana, country and folk artists, both established and upcoming.
Head over to our 'Contact Us' page if you want to reach out to us.